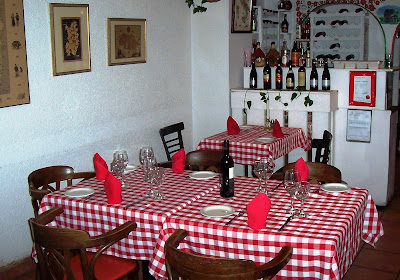 Amerigo Ennas has put the cooking lessons he learned from watching his grandmother prepare meals into his own menu favourites.

It was Amerigo’s grandmother who really taught this Westbank chef how to cook.
Growing up on the island of Sardinia off the coast of Italy, Amerigo spent time watching his grandmother create succulent dished rich in the community’s favourite ingredients from veal to lamb to artichokes.

“My grandmother was an exceptional cook. I learned a lot of things from her,” Amerigo recalled, stirring a mixture of cream, red wine and parmesan in the well-stocked yet simple kitchen at his Amerigo Nurgahe restaurant on Main Street in downtown Westbank.

“The sausage I make, I still use her recipe and some other things too.”
Amerigo left his homeland at age 18. He took his heritage with him cooking his way through France, Germany and Luxemburg before he landed in London, England in the 1960s.

A traveler by nature, Amerigo was tempted to move on to Australia, but when an Italian fellow dropped into the restaurant and invited Amerigo to work with him as chef at his resort hotel in Quebec, he figured, why not. “He said Canada was a beautiful country and he would send me a letter of employment,” Amerigo said.
The letter arrived; Amerigo packed his bags, and other than holidays has never looked back.

After working for years in Quebec, Amerigo decided to come to Vancouver. Then thirteen years ago, his wife and son packed up again to be closer to his wife’s family who lived in Westbank. That was 13 years ago when the Westbank palate hadn’t evolved to what is today. “Nobody knew what pesto was 13 years ago,” he said, thinking to the time he spent crushing fresh basil and pine nuts only to find no one ordered it. So, for a time he reverted to the Italian classics still loved by so many Canadians like fettuccini Alfredo. It’s still on the menu today, but so are many items more akin to the Sardinian style he grew up with.

“My Chicken ala Sardinia is practically my grandmother’s recipe,” he said. “It’s done with artichokes and Sardinian artichokes are exported all over the world. “They come out earlier in the season and they’re good, nice and tender”
Sardinian cooking is known for working with herbs and wine and glaze. Olives are a mainstay and meat is treasured.

Amerigo’s favourite meat is lamb, but he’s so particular he won’t make it a regular item on his menu. “I used to use New Zealand lamb but it wasn’t good enough. Now I use a fresh special Australian lamb, but right now I can’t get any because they had a fire at the packing plant there so I have to wait three weeks. It’s very good,” he said.

He also offers a few insider tips. There is nothing that great about grape seed oil, good for cooking perhaps, but never for salads. Only extra virgin olive oil will do here. He scoffs at marketing companies that put “extra extra” virgin on the label. “There’s no such thing,” he laughs.

The dishes are done now – one fettuccini Alfredo and one pasta chicken dish with mushrooms, cream and tomato. Working on his own for the lunchtime crowd he steams milk for a cappuccino. The foam is so thick you could stand a spoon in it. Truly a taste of Italy!

Posted by Amerigo's Italian Restaurant Kelowna at 6:30 AM