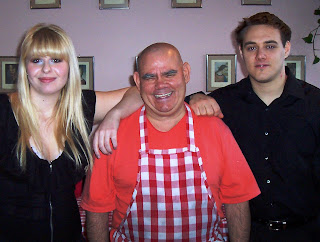 Amerigo left his homeland of Sardinia Italy at age 18. He took his heritage with him cooking his way through France, Germany and Luxemburg before he landed in London, England in the 1960s.

A traveler by nature, Amerigo was tempted to move on to Australia, but when an Italian fellow dropped into the restaurant and invited Amerigo to work with him as chef at his resort hotel in Quebec, he figured, why not. “He said Canada was a beautiful country and he would send me a letter of employment,” Amerigo said.
The letter arrived; Amerigo packed his bags, and other than holidays has never looked back.

After working for years in Quebec, Amerigo decided to move to Vancouver. Then seventeen years ago, his wife and son packed up again to be closer to his wife’s family who lived in Westbank BC.

Amerigo’s three decades of cooking experience is evident in his mouth watering dishes of tortellini, fettuccine, lasagne and routine, his authentic pastas imported from Italy. He takes pride in his homemade sausage and desserts, in which cheesecakes are a favourite.

Posted by Amerigo's Italian Restaurant Kelowna at 6:25 AM